The Cambridge centre run by Opcare, the service branch of AMG, has been working hard to help a veteran soldier go for gold at the Invictus Games in Sydney this month.

Wayne Harrod lost his left leg below the knee in 2001 after it was crushed by an 11-ton reconnaissance vehicle whilst training on Salisbury Plain. He took up cycling as a way to keep fit, eventually winning silver in the cycling time trial at the games in Toronto last year. After being selected to represent Britain again in a 72-strong team, Wayne has decided he wants to win gold!

Feeling that Wayne would be able to go faster on his bike with a more sophisticated, and risk assessed, prosthetic leg, Opcare prosthetist Eilidh Hannah enlisted the specialist expertise of the clinical engineering innovation team at the Cambridge University Hospital (CUH) NHS Trust thanks to funding from the Veterans Prosthetics Funding Panel.

“For Wayne, my task was to prescribe and work with our prosthetic technicians to provide a limb which is comfortable, durable, lightweight and aerodynamic,” Eilidh explained. “When reviewing Wayne’s previous prosthesis I felt that by working with clinical engineering and our gait lab, we could come up with a design that would help improve his chances at the games.”

The limb is made out of carbon fibre laminate with a custom-made aluminium component. Following various prototypes, this set-up was judged to be best for Wayne, whilst considering weight, durability, function and aesthetics.

“I feel a lot stronger and fitter than I did in Toronto last year, and the design of this prosthetic limb is helping me cycle harder and faster,” said Wayne.

“I am hugely appreciative of Eilidh and the Clinical Engineering department – in particular, Maighread Ireland and Daniel Marsden – for helping to design this prosthetic limb which will hopefully help me bring back gold for Britain, Cambridgeshire and the NHS.”

On behalf of Opcare, we would like to say well done to Eilidh for spearheading this project, and best of luck to Wayne when he races! 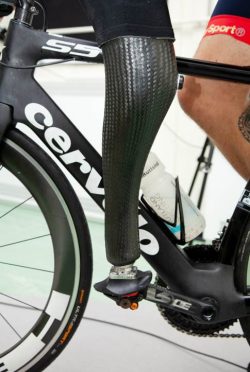 With a time of three minutes and 3.63 seconds, Wayne claimed the bronze medal, with his fellow British team mated Steve Sebburn and Karl Allen-Dobson taking gold and silver – three British medals in the same event!

Later that day, Wayne competed in the Men’s Road Cycling IRB2 Criterium, finishing in fifth place with a time of 33:43:00. 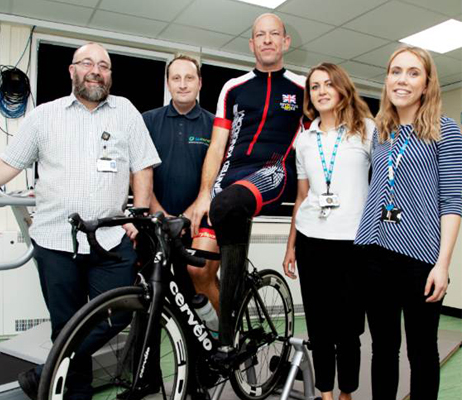 Back to News page
Get the latest on Ability Matters by subscribing to our newsletter
Let us know a bit about you so we can send you the most relevant information possible
×
We use cookies to ensure that we give you the best experience on our website. If you continue to use this site we will assume that you are happy with it.Ok